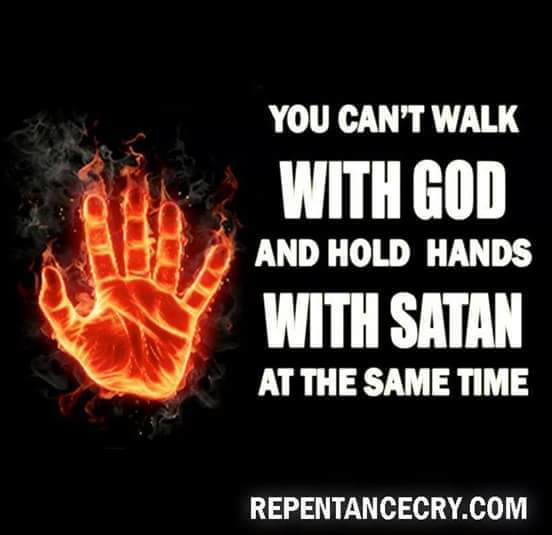 “No one can serve two masters; for either he will hate the one and love the other, or else he will be loyal to the one and despise the other. You cannot serve God and mammon”. (Matthew 6:24 NKJV).

“For do I now persuade men, or God? or do I seek to please men? for if I yet pleased men, I should not be the servant of Christ. But I certify you, brethren, that the gospel which was preached of me is not after man. For I neither received it of man, neither was I taught it, but by the revelation of Jesus Christ”.
(Galatians 1:10-12).

Ecclesiastes 12:14
For God shall bring every work into judgment, with every secret thing, whether it be good, or whether it be evil.
1Corinthians 3:13-15
“Every man’s work shall be made manifest: for the day shall declare it, because it shall be revealed by fire; and the fire shall try every man’s work of what sort it is.
If any man’s work abide which he has built thereupon, he shall receive a reward.
If any man’s work shall be burned, he shall suffer loss: but he himself shall be saved; yet so as by fire.
•In Christ we have all that pertains to life and godliness.
Colossians 3:23
And whatsoever all of you do, do it heartily, as to the Lord, and not unto men.
•Knowing that God’s work done His way will never lack His supply.
•Put the Love of God in everything you do, and in everything you do put your Faith in God.
•You will reap many rewards in this life and in the life to come.
•Continue to let the Word of God be the standard for your life. Blessed you are and blessed you will always be and to God be all the glory. Amen!

Remove your idols,or Good will.

“When the Philistines took the ark of God, they brought it into the house of Dagon, and set it by Dagon. And when they of Ashdod arose early on the morrow, behold, Dagon was fallen upon his face to the earth before the ark of the LORD. And they took Dagon, and set him in his place again. And when they arose early on the morrow morning, behold, Dagon was fallen upon his face to the ground before the ark of the LORD; and the head of Dagon and both the palms of his hands were cut off upon the threshold; only the stump of Dagon was left to him. Therefore neither the priests of Dagon, nor any that come into Dagon’s house, tread on the threshold of Dagon in Ashdod unto this day. But the hand of the LORD was heavy upon them of Ashdod, and he destroyed them, and smote them with emerods, even Ashdod and the coasts thereof. And when the men of Ashdod saw that it was so, they said, The ark of the God of Israel shall not abide with us: for his hand is sore upon us, and upon Dagon our god”.(1 Samuel 5:2-7).