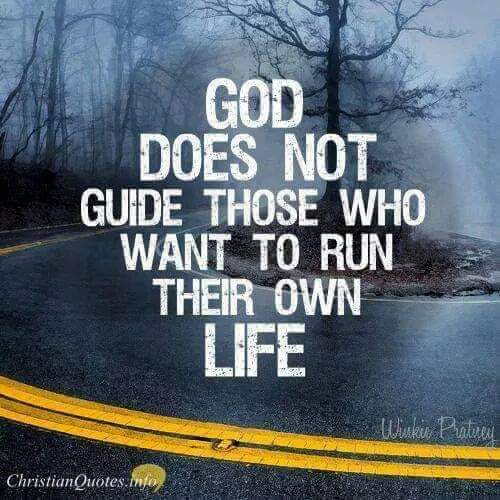 Do you really think you can make it without God ? The truth is,God does  not help those ,who think that they,can help themselves,because  they think  they don’t  need Him.  However ,no matter  what a man thinks  or believe ,we all need God.

“The steps of a good man are ordered by the Lord , And He delights in his way. Though he fall, he shall not be utterly cast down; For the Lord upholds him  with His hand. I have been young, and now am old; Yet I have not seen the righteous forsaken, Nor his descendants begging bread. He  is ever merciful, and lends; And his descendants are blessed. Depart from evil, and do good; And dwell forevermore. For the Lord loves justice, And does not forsake His saints; They are preserved forever, But the descendants of the wicked shall be cut off. The righteous shall inherit the land, And dwell in it forever”.(Psalms 37:23‭-‬29 NKJV).

“The preparations of the heart belong to man, But the answer of the tongue is from the Lord . All the ways of a man are pure in his own eyes, But the Lord weighs the spirits. Commit your works to the Lord , And your thoughts will be established. The Lord has made all for Himself, Yes, even the wicked for the day of doom. Everyone proud in heart is an abomination to the Lord ; Though  they  join forces, none will go unpunished. In mercy and truth Atonement is provided for iniquity; And by the fear of the Lord  one departs from evil. When a man’s ways please the Lord , He makes even his enemies to be at peace with him. Better is a little with righteousness, Than vast revenues without justice. A man’s heart plans his way, But the Lord directs his steps”. (Proverbs 16:1‭-‬9 NKJV).

“There are many plans in a man’s heart, Nevertheless the Lord ’s counsel—that will stand”. (Proverbs 19:21 NKJV).

JESUS   SAID, “I am the vine, you are the branches. He who abides in Me, and I in him, bears much fruit; for without Me you can do nothing.  If anyone does not abide in Me, he is cast out as a branch and is withered; and they gather them and throw them into the fire, and they are burned.  If you abide in Me, and My words abide in you, you will ask what you desire, and it shall be done for you”.(John 15:5‭-‬7 NKJV).

“Trust in the Lord with all your heart, And lean not on your own understanding; In all your ways acknowledge Him, And He shall direct your paths. Do not be wise in your own eyes; Fear the Lord and depart from evil. It will be health to your flesh, And strength to your bones”. (Proverbs 3:5‭-‬8 NKJV).