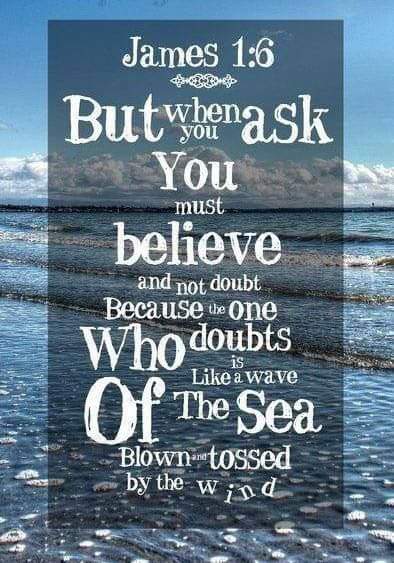 “Most assuredly, I say to you, he who believes in Me, the works that I do he will do also; and greater works than these he will do, because I go to My Father. And whatever you ask in My name, that I will do, that the Father may be glorified in the Son. If you ask anything in My name, I will do it”. (John 14:12‭-‬14).

““Ask, and it will be given to you; seek, and you will find; knock, and it will be opened to you. For everyone who asks receives, and he who seeks finds, and to him who knocks it will be opened. Or what man is there among you who, if his son asks for bread, will give him a stone? Or if he asks for a fish, will he give him a serpent? If you then, being evil, know how to give good gifts to your children, how much more will your Father who is in heaven give good things to those who ask Him! (Matthew 7:7‭-‬11).

Question: “What does it mean to have mustard seed faith?”
Answer: Faith is so vital to the Christian life that Scripture tells us that, without it, it is impossible to please God (Hebrews 11:6). Yet faith is such a powerful gift from God (Ephesians 2:8–9) Christ told His disciples that, with just a tiny measure of it, the size of a mustard seed, they could move mountains. So, what does it mean to have “mustard seed faith”?
We see the reference to “mustard seed faith” twice in Scripture. First, in Matthew 17:14–20, we see Christ’s disciples unable to exorcise a demon from a young boy, even though Jesus had previously given them the authority to do this very thing (Matthew 10:1). When they inquired of Jesus why they were not able to drive the demon out, the Master replied, “Because you have so little faith. I tell you the truth, if you have faith as small as a mustard seed, you can say to this mountain, ‘move from here to there’ and it will move; Nothing will be impossible for you” (Matthew 17:14–20). Next, in Luke 17:6, Jesus tells His disciples, “If you have faith as small as a mustard seed, you can say to this mulberry tree, ‘Be uprooted and planted in the sea,’ and it will obey you.” By using the uncommonly small mustard seed as an example, Jesus is speaking figuratively about the incalculable power of God when unleashed in the lives of those with true faith.
We know that this statement about moving mountains and uprooting trees by faith is not to be taken literally. The key to understanding the passages is the nature of faith, which is a gift from God. The power of faith reflects the omnipotent nature of the God who bestows faith on His own. The mustard seed is one of the tiniest seeds found in the Middle East, so the conclusion is that the amount of faith needed to do great things is very small indeed. Just as in the parable of the mustard seed (Matthew 13:31–32), Jesus uses rhetorical hyperbole to make the point that little is much when it comes from God. The mustard seed in the parable grows to be a huge tree, representing the tiny beginnings of Christianity when just a few disciples began to preach and teach the gospel. Eventually, the kingdom grew to huge proportions, encompassing the entire world and spreading over centuries.
So, too, does the tiniest bit of faith, when it is true faith from God, grow to immense proportions in the lives of believers and spreading out to influence all they come into contact with. One has only to read histories of the great men of the faith, such as Foxe’s Book of Martyrs, to know that superhuman feats were performed by those whose faith was, at one time, only the size of a mustard seed.

Understanding BELIEF
Belief: to accept in your heart and, or mind that something is True or Real without facts or evidence.
Psalm 27:13
I would have fainted, unless I had BELIEVED TO SEE the goodness of the LORD in the land of the living.
2 Corinthians 4:13
We having the same spirit of faith, according as it is written, I BELIEVED, AND THEREFORE HAVE SPOKEN; we also believe, and therefore speak;
+Principle #1 in the Kingdom of God we must Belief before we SEE.
+Principle #2 in the Kingdom of God we must speak (or confess) what we belief.
+Out of these two principles come FAITH to receive the things of God. Hallelujah!
•Continue to let the WORD of God be the standard for your life. Always LOVING others like Christ Jesus loves us while keeping our faith, trust and confidence in Him.
•BLESSED you are and BLESSED you will always be and to God be all the GLORY. Amen!