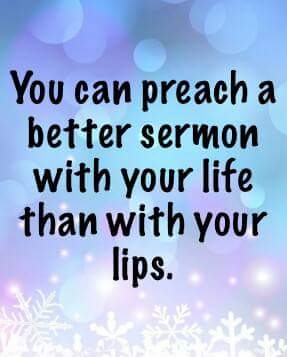 But be doers of the word, and not hearers only, deceiving yourselves. For if anyone is a hearer of the word and not a doer, he is like a man observing his natural face in a mirror; for he observes himself, goes away, and immediately forgets what kind of man he was. But he who looks into the perfect law of liberty and continues in it, and is not a forgetful hearer but a doer of the work, this one will be blessed in what he does.
{James 1:22-25}.

Several years ago, a preacher from a distant town accepted a call from a church in Leeds. Some weeks after his arrival, he had an appointment that made him to board a bus to another part of the town. When he sat down, he discovered that the driver had mistakenly given him his balance in excess of 50 pence. As he considered what to do, he thought within him, ‘You’d better give this money back. It would be wrong to keep it’. Then another thought came, “Oh, forget it, it’s only 50p; who would worry about this little amount, afterall the bus company makes so much money on fares; they will never miss it. Accept it as ‘a gift from God’ and keep quiet. “When he was getting down from the bus, he paused momentarily at the door, and then handed the 50p to the driver and said, ‘Take; the balance you gave me was in excess’. The driver, with a smile, replied, ‘Aren’t you the new preacher in town?’ ‘Yes I am’, he replied. ‘Well, I have been thinking a lot lately about where to go to worship. I just wanted to see what you would do if I gave you a balance in excess. I’ll worship with you at the church this Sunday. When the preacher stepped off the bus, he grabbed a nearby electric pole, looked up and said, ‘Oh God, I almost sold your Son for 50 pence!’. Our lifestyles are the only Bible some people will ever read. This is just a subtle example of how much people watch us as Christians, and will put us to test! Always be on guard — and remember — You carry the name of Christ on your forehead and shoulders, once you say you are a Christian. ‘Watch your thoughts; they become words. Watch your words; they become actions. Watch your actions; they become habits. Watch your habits; they become character. Watch your character; it becomes your destiny’. I’m glad a friend forwarded this to me as a reminder and I chose to forward it to you. If you don’t pass this on to anybody, nothing bad will happen to you; but, if you do, you would have ministered to someone today and God will bless you. If you must miss any place, don’t miss HEAVEN. If you must miss any appointment, please don’t miss THE RAPTURE. If u must miss any meal, please don’t miss THE MARRIAGE SUPPER OF THE LAMB. The end is no more NEAR, it’s HERE. Its global evangelism day please send this to all those you’d like to see in heaven.

“But why do you call Me ‘Lord, Lord,’ and not do the things which I say? Whoever comes to Me, and hears My sayings and does them, I will show you whom he is like: He is like a man building a house, who dug deep and laid the foundation on the rock. And when the flood arose, the stream beat vehemently against that house, and could not shake it, for it was founded on the rock. But he who heard and did nothing is like a man who built a house on the earth without a foundation, against which the stream beat vehemently; and immediately it fell. And the ruin of that house was great.”
[Luke 6:46-49]